All Great Things Come in 8’s!

The Octopus family is one of the most incredible and fascinating groups of marine life in the ocean and people know so little about them. We all know that they have 8 arms but did you know that they are one of the most intelligent species on the planet and that they have more than one heart? In keeping with the theme of their 8 arms, read on to find out more about our favourite 8 species we have here in North Sulawesi and our best dive sites in Manado, Bunaken and around Bangka…..

Ever heard of the Long-arm Octopus (Abdopus sp.)? This octopus is found on sandy areas of bays and lagoons and we see it most often at City Extra dive site just off our Murex Manado Resort and also at Peter’s Sponge dive site in Bangka. It is a small octopus that has a body length of up to just 6cm. We see this species between 5m – 20 m so it’s possible for all levels of divers to have an encounter. When we see them in shallow water they are particularly good photography subjects. The Long-arm Octopus is only found in the Indo-pacific region (that’s why it’s also known as the Indonesian Long-arm Octopus) so they are a very special sighting for our guests. Did you know that there is more than one species of Blue-ring octopus? It’s true! Scientists have now noticed differences among Blue-rings and here in North Sulawesi we have found two distinct species of these little guys. The blue-ringed is recognized as one of the world’s most venomous marine animals and despite their small size, 12 to 20 cm (5 to 8 in), and relatively docile nature, they can be incredibly dangerous (even deadly) to humans if provoked. They can be identified by their characteristic blue and black rings, and yellowish skin. When the octopus is agitated, the brown patches darken dramatically, iridescent blue rings, or clumps of rings, appear and pulsate. Typically, 50–60 blue rings cover the dorsal and lateral surfaces of the mantle. Lucky for us that their preferred prey is small crabs including hermit crabs and shrimp. The best North Sulawesi dive sites for finding Blue-ring octopus are our House Reef directly in front of Murex Bangka Resort (where they love the rock pools at low tide) and also in Bangka; Peter’s Sponge. Which species of octopus is the most intelligent? The Coconut Octopus (Amphioctopus marginatus) has to be in the running for the title! Also referred to as the Veined Octopus, it has a sturdy looking brown body detailed with fine darker lines. It is one of the smaller octopus species with arms growing up to 30cm and it can change colour dramatically from blue-ish hues to bright white. They usually bury underneath the sand to escape predators but they also lodge themselves inside empty bi-valve shells. When shells are in short supply they substitute them with more readily available coconut husks – hence their name. If no husks or shells are present they will use natural debris or trash, including beer bottles! When moving around they carry their host with them underneath the mantle whilst they walk on extended arms as if on stilts. This use of tools and their apparent forward planning makes them an interesting octopus species to observe. Once inside the shell, or chosen host, the octopus uses its suckered arms to hold itself inside and pull the other half of the shell or piece of debris over the top – a tightly sealed trap door! Coconut octopus are seen in many parts of Indonesia but here in North Sulawesi our top spots for sightings include Paradise Pier in Bangka and Bethlehem and City Extra around our Manado resort. This species is worth watching for some time as their intelligent behaviour is quite intriguing! A Coconut Octopus peers out of its temporary home, an empty beer bottle.

Is it is a lion fish? Is it a flounder? No, it’s the Mimic octopus (Thaumoctopus mimicus)! This species was actually discovered here in Sulawesi and is now on most divers’ wish lists to see. Our guides have had some excellent sightings at Paradise Pier in Bangka as well as at City Extra and Bethlehem here in Manado. The mimic octopus is a smaller octopus, growing to a total length of about 60 cm (2 ft) – including arms, which it can stretch out or make appear shorter. The octopus’ natural color is a light brown/beige color, but when it is in defence or attack mode it usually appears to have more noticeable white and brown stripes or bands. It’s ability to change body shape to scare off predators by imitating other poisonous and vicious marine species is extraordinary and the reason why it was named the “mimic” octopus, Some of the other marine species that this clever little octopus can “mimic” include crabs, jelly fish and even sea snakes! Our guides often spot just the mimic octopus’ eyes peering out from its hole in the sand but when you see the mimic in action it’s a show stopping sight! Our guides often spot just the Mimic Octopus’ eyes peering out from its hole in the sand.

Mimic or Wunderpus? First, let’s get technical. The mimic is officially categorised as Thaumoctopus mimicus and the wunderpus is Wunderpus photogenicus. The Wonderpus, like the mimic, is another species that was first discovered here in Sulawesi and at first glance it appears very similar to the mimic as it also has the ability to impersonate other marine species. For seasoned divers though there are a few tell-tale distinctions between these two incredible octopi. Whereas the mimic has dark brown stripes, the wunderpus’ coloration has much more of an orange hue to it. Also, the wunderpus is smaller in size than the mimic but unless you have them side by side this may not be so helpful. One feature that can make for easier identification is the eyes. The mimic octopus has eyes on short stalks whereas the wunderpus’ eye stalks are elongated and give it a permanently “alert” look – these longer eye stalks also make it easier to spot when it is peering out of sand burrows. Another factor to look at is the clarity or contrast of the “bands”. When the mimic octopus displays stripes they are slightly bleary or mottled at the edges whereas the wunderpus’ bands are clear cut from white to orangey-brown with no blending. If you’re still not sure which one you are looking at, check the suckers underneath the arms. A mimic octopus has a bright white line that runs along the underside of the arm from where the suckers are positioned. On a wunderpus however, there is no white line base and the banded color of the octopus continues right the way down to the suckers, If you’re still not sure? Ask your Murex Guide! If you see a wunderpus with us here at Murex then there is a good chance it will be at Sampiri 1, 2 or 3 as they are our best spots for sightings! It’s all in the name! Starry Night Octopus (Octopus luteus) – unsurprisingly this quite rare species is most often found during night dives on areas of coral rubble and sand or patches of rocky coral reefs. This, usually reddish brown colored octopus, displays white star-like spots all over its body when it becomes agitated or threatened. The scientific name for this species is Octopus luteus and its small body size measures up to only 13 cm, although its arms can be up to 80 cm. They are often in the shallow water, upward of 15 meters and our best spots for sightings are City Extra and Manado House Reef. When you see one of these octopi you need be quick to take your photographs as they are surprisingly fast moving! The Hairy Octopus – it’s true – it does exist (Octopus sp. undescribed)! But you have to very fortunate to spot one. We find this species at our Sampiri dive site in Bangka but not only is it difficult to spot due to its small stature (body size from only 1.5 to 5 cm and arm length from 3-10 cm), its hairy appearance makes it a master of disguise. The best areas for sightings are on coral rubble patches and it can be seen during both day and night dives. There are several variations in terms of color but most commonly it ranges from white to cream to brown to red, either with a pattern of spots or not. It’s easy to mistake this little critter for sea weed or even an orangutan crab so look very carefully and you might be pleasantly surprised! Not enough rings to be a Blue ring? Too beige to be a Coconut Octopus? Then the chances are that you are looking at the very rare Mototi Octopus which is also known as the Poison Ocelot Octopus (Octopus mototi) This rather small Octopus can be easily identified by its two blue Rings (one on each side) that it displays when excited or threatened. It can also resemble the coconut octopus by shape but its coloration is different. The Mototi is a very secretive species and is often found hiding in natural crevices and also in man-made hideouts such as bottles and cans. In terms of body size they are similar to the Blue ring but some adult individuals have been recorded with a body size of up to 10 cm. Look out for them on coral rubble patches and sea grass beds and in bottles, cans and shells. The best sites to see them at are in Lembeh at Air Prang, Jahir and Hairball in Lembeh. This rather small Mototi Octopus can be easily identified by its two blue rings (one on each side). Image ©Sascha Janson uw-pix.com

So next time you are in North Sulawesi look out for some of these species of North Sulawesi Octopus and see which ones you can check off your list. If you want to find out more about our marine life, dive sites or to book your next diving expedition email us at reservations@murexdive.com 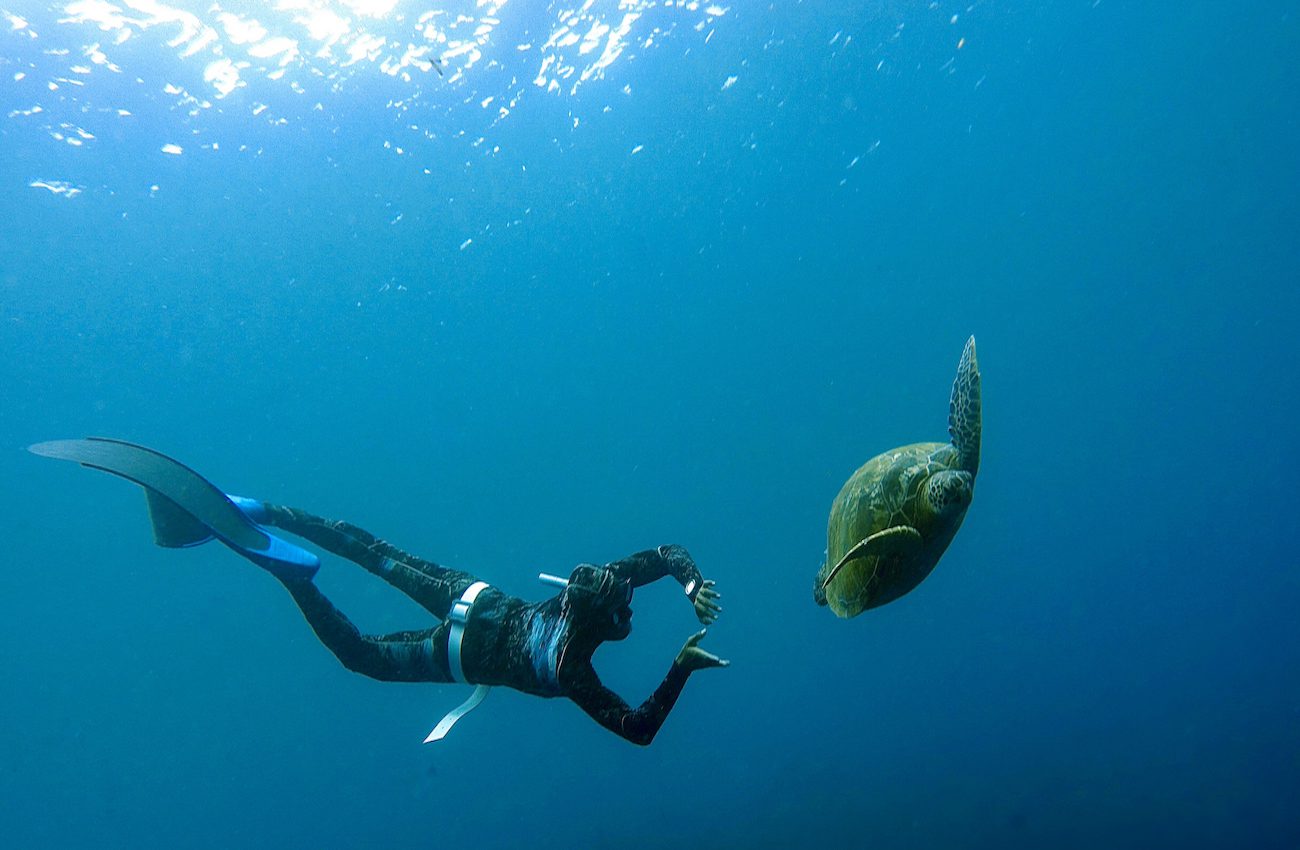 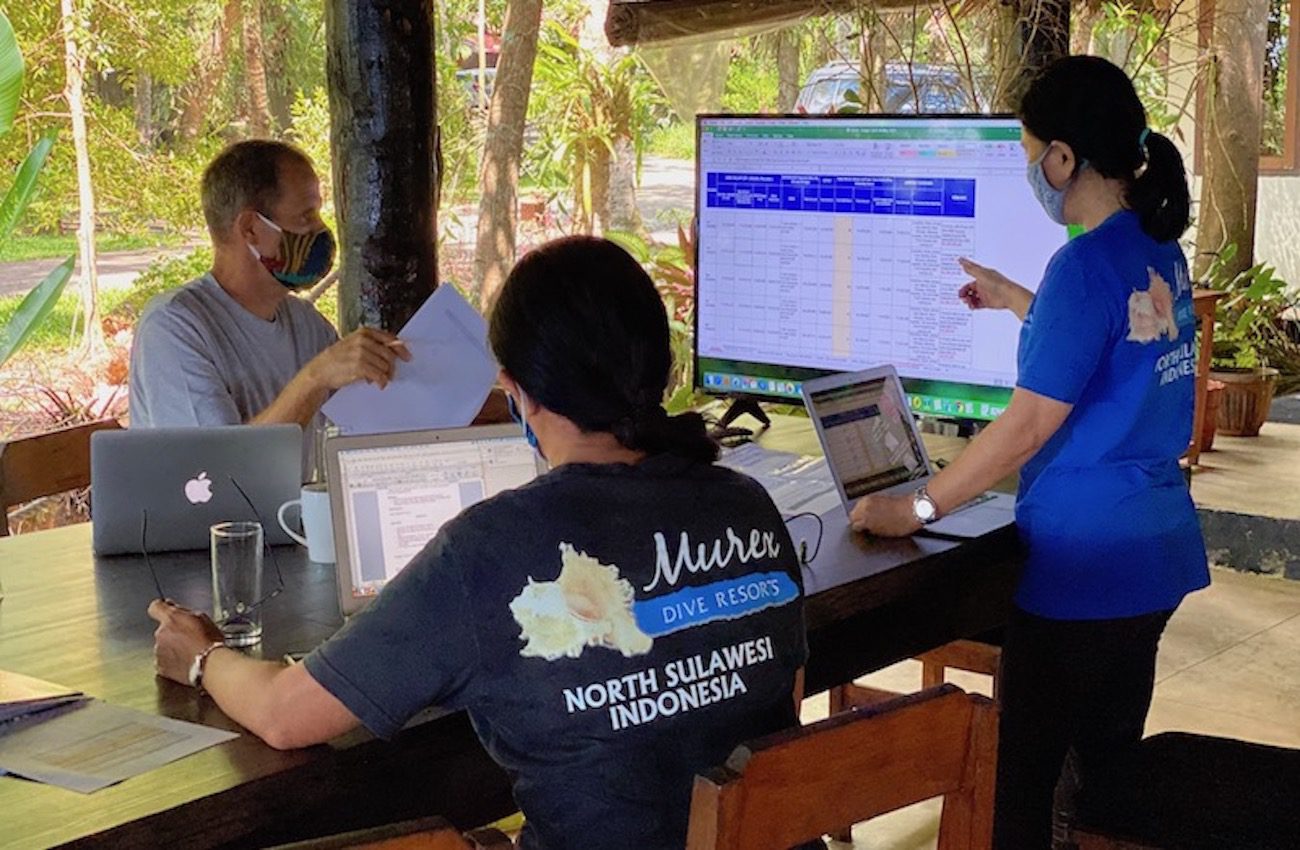 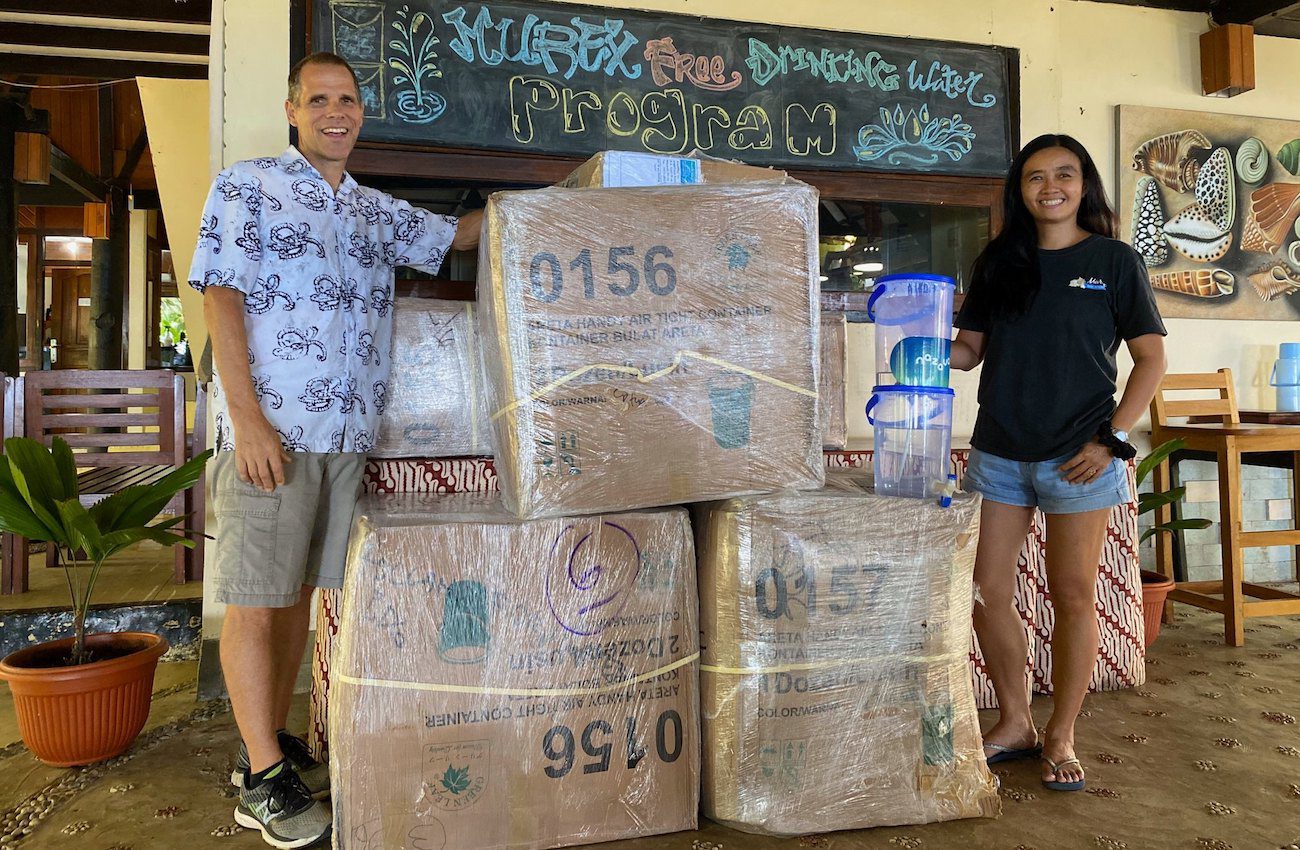